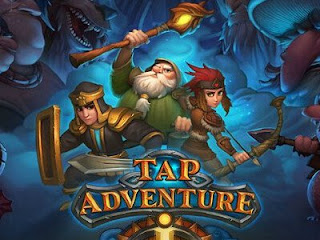 Tap Adventure, I call these types of games tap-a-thons for mobile platforms. The goal is simple, whenever you tap, you deal damage, and... that's all you need to know.

With each tap, you do damage to the enemies on the screen at the time, when they die, you get coins which you are use to either upgrade your own damage, recruit new minions, or upgrade your minions. You do this until, well, the end, which I haven't reached yet.

Each level is divided into 10 waves, each wave ends with a boss called the commander which is stronger than your normal enemies and after 10 waves, you fight the epic boss, which is a stronger version of the commander. When you beat the commander, you are transported to a new area. Rinse and repeat.

Each minion that you recruit will attack automatically on its own and you can upgrade their attack and life. Upgrades cost coins and each upgrade increases all subsequent upgrade cost. The upgrades give your recruits abilities that are passive as well as some that are active (one per recruit) which you can active while in combat, they range from attacks to heal spells. Each of these active abilities will have a timer, so that it restricts how often you can use them.

Occasionally, chests are dropped that require keys to unlock and you begin with a small amount of them. As you progress through the game, you get to the point where you run out of keys but you will keep getting chests. You will hit a point where you have the ability to 'Time Loop' which will reset everything back to 0, but you will gain keys and rune stones which you can use to buy/upgrade relics which are items that have passive abilities for everyone, this ranges from DPS increase to coin increases. So, you see that there is a lot to it while at the same time, there isn't much to the game.

As a bonus, while you are away from the game, coins are collected on your behalf, so you can leave the game for awhile and come back and collect a lot of coins for upgrades. The ads in this game are not intrusive and don't happen that often. The ads themselves are usually links to games that Kongregate released, so I have no issues with them. In-app purchases are present, but unnecessary in my opinion and don't really add much to the game.

I thought I would have dropped this game awhile ago, but for some reason, I keep coming back for a little bit, it might have to do with how little I need to pay attention in order to get something out of the game. Free-to-play, so give it a shot. There are several games that are like this and I'm sure if you like this one, there are tons more for you to try out.

Come back next Wednesday for my Final Thoughts on Kingdom Rush for Android.
Posted by Wai at 7:00 AM